Jalapeno Bread in a Rice Cooker

I was curious to try baking in a rice cooker because what is a rice cooker but a container which emits heat semi-evenly from all directions?  Like Alton Brown or like anyone who lives in a small apartment, I'm all about multi-functional appliances.  A rice cooker is a surprisingly versatile appliance.  I had already figured out how to make yogurt out of both my rice cooker and crockpot.  I really wanted to know if it would bake bread.

The problem with baking bread in my toaster oven is that the loaves have to be really small or the tops and bottoms will burn.  I end up spending several hours baking bread in batches, and the last few loaves always look a bit deflated from the yeast dying out.  With a rice cooker, I just threw in the whole lump of dough then went and watched The Bad Girls Club (a lifestyle inspiration, really).

Making jalapeno bread in the rice cooker was my first crack at baking bread in a rice cooker.  It turned out really well.  The texture is slightly spongy/doughy because the rice cooker traps moisture and slightly steams the bread.  It would've been more AWESOME with some melted cheddar cheese on top, but my piggy sister ate ALL OF IT before I could throw it back in the rice cooker.  Since then, I've made a nice loaf with the melted cheese, and it's delivered all that my deductive reasoning had pointed to.

Put the yeast into a bowl and add a pinch of sugar and about 1/4 cup warm water.  Let it sit for 10 minutes to get the yeast activated.  It should look all foamy and crazy when done. 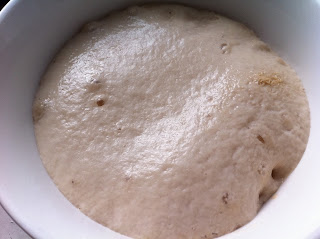 While waiting for the yeast, put the flour, salt, and sugar into the rice cooker and mix to combine.  Then add the milk and then the yeast mixture.  Mix around to form a dough.

Get the butter and stick it into the middle of the dough ball.  Throw the jalapenos on top. 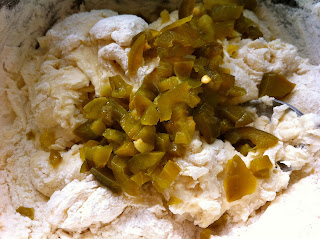 Then knead for about 10 minutes to get the butter and jalapenos incorporated.  Form into a ball again.

Stick the dough into the rice cooker and let it rise for about an hour until doubled in size.  You can have the rice cooker on the warm setting if you're baking in the winter and you have a converted sunroom for a kitchen (me).

When the dough has risen, punch it down.  Form it into a ball again.  Let it rise for another hour in the same way as the first rise.

When risen, turn the rice cooker on and cook for one hour.  If you have a cheap rice cooker like mine, you'll have to walk by and make sure the auto-shutoff hasn't switched the cooking cycle to warm.  After one hour, flip the bread, sprinkle with shredded cheddar cheese and cook for another 45 minutes to an hour.  (My bread loaf looks like an octopus because the dough rose too much and stuck all over the top of the rise cooker.  If you have a small rice cooker like me, scale the recipe down a bit or use less yeast.)

After another hour or so, you should have a nice, rotund loaf of jalapeno bread!  The pictures don't show cheese because these were taken the first time around where the cheese never made it.

Since then, I've succeeded in making no-knead bread in the rice cooker.  The lazy, no-knead, 3-ingredient bread.
Posted by Unknown at 12:48 AM