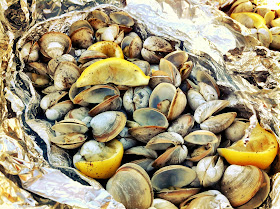 After spending this past week in and out of the animal hospital for my poor cat, I decided I needed a real weekend.  One could argue that my whole life is one big weekend, but *surprise* *surprise* I've started a job.  It's actually an internship, but it does involve the adult-like practice of waking at 7am and wearing real clothes.  So playtime and jet-setting over.  Profound realization of what a weekend is?  *on*  To compound the effects of weekend appreciation was the Chuseok holiday (Korean Thanksgiving).

Typically for Chuseok, you cram yourself into an apartment with your loving relatives who always have the most uplifting comments to offer. "My god have you gotten fat."  "Your face is looking less pimply these days."  "Is your brother still in a mental institution?"  After spending my first Chuseok in Korea this way, I resolved to never again.  Ever.


Fast forward to this year's Chuseok:  Muuido Island with friends.  Muuido is a short trip from Incheon Airport, and later, I'll share tips on how best to get there.

I love Muuido because of its WTF factor.  Hanagae Beach is beautiful because it isn't the typical white-sand-turquoise-blue-waters beach.  It has amazing mud flats.  Errr, wut?  Mud is beautiful?  Yeah, check this out.

The mud flats stretch on for leagues.  In fact, it has claim to one of the greatest tidal ranges in the world.  When the tide is in, it's sandy beach meets salty ocean.  When the tide is out, you can walk forever (forever = 15-20 minutes) before you finally hit water.  With all this shamelessly naked terrain, the opportunities for quahoggin' are as bountiful as the mud they dwell in.

Noel, "I saw a bubble.  Stuck my toe in it and flicked out a clam!"  Is it really that easy?  No.  But after your first clam, your primordial instincts kick in, and it is impossible to stop.  I finally stopped only after I had one sprained wrist and had enough sand under my fingernails to feel like a Viet Cong POW.

How to Dig Clams
We brought gardening tools to dig with.  Really anything works.  My friend has amazing success with a spade.  Most prefer the trowel.  Towards the end when I getting a bit delirious from all the adrenaline of hunter/gathering; I started clawing away at the mud with my bare hands (*this method not recommended*).

Whatever you decide to use, you will find clams.

They tend to be found in clusters, so if you find one, stay there and start digging in that spot.  You're bound to dig up a whole family o' clams all huddled in the mud and fearin' fer their lives!  Speaking of which, leave the small clams.  They're a pain to eat and you gotta do what's responsible for sustainability.  BUT THE REST IS FAIR GAME SO GIT 'EM!

While you're busy hacking through the mud with your death instrument of choice, you'll unavoidably amputate some crab limbs and accidentally smash some clams open.  Just try to be careful, or try not to care.

Also, be sure to throw some saltwater into the bag to keep the clams alive as you dig.  If you're out there for hours and the clams are just sitting in a plastic bag, they will die. 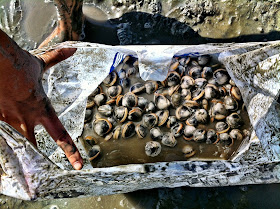 Where to Dig Clams
The best spot is towards the far end of the beach away from the zip line and beach huts.  You'll see a little area where all the rocks are.  That's your gold mine!

How to Prep Clams
Digging clams is the fun part.  Cleaning them and getting them to spit up all the sand they're storing in their shells is the hard part.  After rinsing them off, the clams need to be soaked in clean seawater for at least four hours where the water is continuously switched out - maybe 3 or more times.  It's best to go clamming in the morning, and then they can de-sand all day and be ready for dinner.

Unfortunately, we went mid-day and the prospect of waiting 4+ hours for dinner was not an attractive option.  So, I used my sweetest Korean and talked one of the restaurants to swap out their already-prepped clams for our dirty, sandy clams.  So nice of them to oblige.  On a side note, I really recommend eating at this nicest-restaurant-ever.  The old man is so amazingly nice, and the food is delish.

How to Cook Clams
I think it's pretty obvious you'll need a fire.  We brought our own charcoal, which you can buy at any of the little marts on Muuido.  We gathered wood for the fire out around the island in the woody areas.  I would be more specific, but I had no part in this unpleasant task.

Get a fire going using the best of your scout skills.  I had none so the menfolk did it.  Let the fire die down to white-hot embers, and then you're ready. 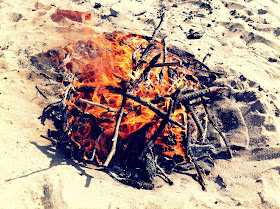 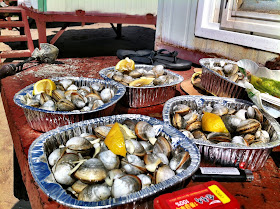 You can also fashion aluminum packets, but then you'll lose some of the clam juice to dip bread in.  However, it is an option because I hear the aluminum lasagna-like containers are hard to find.

Throw in some white wine, garlic, butter, and pepper with each package of clams, and you'll have yourself a real clam bake feast.  The end result was staggeringly fresh and succulent.  It took about ten minutes or so on the fire.  I would recommend just checking on the clams, until you see that they've opened.  That means they're good and dead and ready to be eaten.  Discard any unopened clams.  Enjoy with some crusty bread for dipping.

6 dozen fresh clams
4-6 cloves of garlic, sliced, crushed, or minced
1 bottle of white wine
1 stick of butter
1 lemon, sliced or cut into wedges
chopped parsley (optional - we grow our own)
salt and pepper

How many clams you have in each aluminum foil container depends on the size of the container.  I used ones big enough to fit about 1.5-2 dozen clams in each one.  There is no real recipe.  Because you don't have an actual kitchen, you're most likely slicing up garlic with a pocket knife.  Be resourceful.

In each packet, I squeezed a wedge or two of lemon and threw in a clove or two of sliced garlic.  Then you can add a few healthy splashes of white wine and drink whatever is left over.  Wrap each container with aluminum foil and place directly on the hot embers.  Wait about 10-15 minutes, checking often to see if the clams have opened.  When they have, take them off the fire, and open the packages up.  If you have parsley, spindle it on.  It probably won't need salt, but season to taste with some S&P.  Then dig in!  Tear up some baguette to dip into the god-awesome clam juices at the bottom.  Use the melted butter as a dipping sauce.

Packing List
I've put together a packing list to make it convenient to see what you'll need to take to the island to make this whole production successful.


Gardening tools for digging (trowel, spade, and rake work best)
Plastic bag or something to hold the clams as you're digging
Container like a bucket to hold the clams as they're being soaked in seawater
Lighter
Lighter fluid (optional)
Charcoal (can be purchased at the mart as soon as you land)
Butter
Lemon
White wine
Garlic
Salt and pepper
Baguette
Aluminum foil
Aluminum containers
Napkins or paper towels
Plates

Accommodations
I love staying on the beach huts on Hanagae.  They're only 30,000 won a night.  No bathroom or shower.  The bathrooms are a short walk from the huts.  The huts are literally just a room on the beach with heated floors.  Obviously, no bed.  You'll be sleeping on the ground.

There are several ways to get to Muuido.  The journey can be cut up into the following legs: 1) get to the Incheon airport 2) get to the Muuido ferry terminal 3) get to Hanagae Beach on Muuido.  For the first leg of getting to Incheon airport, there are three public transportation options - Commuter Airport Railroad, Express Airport Railroad, and Airport Limousine Bus.  From Seoul Station, the Commuter Airport Railroad takes minutes while the Express Airport Railroad takes 43 minutes.  The only issue I have with taking the Express train is that it only leaves from Seoul Station and only leaves every 30 minutes on the hour and half hour.  For me, it could take just as long to take the Express Train as the Commuter Train because of these contraints.  The Commuter Train is about a third the price of the Express Train which is 13,800 won (right now on sale for 8,000 won).  From anywhere in Seoul, the Airport Limousine Bus takes about 1.5 hours.

From the Incheon Airport, you'll need to take a bus or taxi to the Jamjinnaru Ferry Terminal.  Bus 222 goes there from the airport, but I've never taken it.  Usually, I take a taxi which costs about 10,000 won and takes about 10-15 minutes from the airport to the ferry.

Before I move onto leg 3 of the trip, there's an alternate, MUCH FASTER AND CONVENIENT option.  Take a taxi.  A taxi to Incheon Airport costs 60,000 won.  While that may seem expensive, it ends up being about the same price and much faster than the public transportation options.  Instead transferring here and there and paying 5,000-15,000 to get to Incheon Airport then another few chunwons to get to the ferry terminal, just take a taxi from door to ferry terminal in one sweep.  Split amongst 4 people, that's 15,000 won each.  Such a deal.  So much easier, especially if carrying a box of white wine, cooking stuff, gardening tools, and a cat.

You may not be able to get a cab to take you straight to the Jamjinnaru Ferry Terminal.  In that case, it still costs 60,000 total to go to the airport, switch cabs to a local Incheon cab and head to the ferry terminal. Drive into Arrivals to switch cabs.  It takes one minute.

Once on the island, you'll need to hop on a bus which will take you to Hanagae Beach.  I've had so many different experiences taking a bus to the beach.  I've taken both the green and yellow bus (both number 01), but I believe the green bus is the one that officially goes to Hanagae Beach.  Just ask the bus driver "Hanagae Beach?" and he'll respond.  Various websites quote a 20-30 minute bus ride from where the ferry drops you off on Muuido to Hanagae Beach.  Once it only took me 7 minutes.  It really depends on whether people are getting on and off the bus and where they are going.

Once off the bus, you'll have to pay 2,000 won to get onto Hanagae Beach.  The admission is good for the duration of your stay as long as you don't leave the beach area.